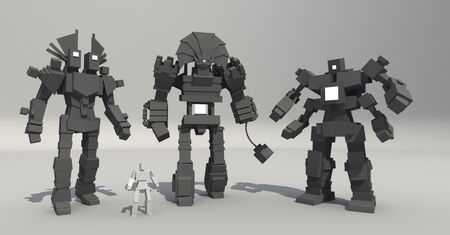 There are multiple game modes in Minimum.

The premier game type! Titan Mode is an objective-focused mode that shares ideas and core 5v5 team mechanics with modern MOBA (multiplayer online battle arena) games and combines them with the fast-paced legacy of arcade shooters like Unreal Tournament and Quake.

A Titan match is divided into 2 repeating stages.

The ultimate goal of Titan Mode is to escort your team’s Titan from your base (where it spawns) all the way to the enemy’s base, where it will destroy their core. Titan’s have a set path that they follow automatically, and this path is blocked periodically by defensive walls that activate when an enemy Titan is near. These walls can only be damaged by Titans themselves, and so it’s important that you keep your Titan alive as long as possible to allow it to inflict maximum destruction in a single life.

Titans can be damaged by most sources of weapon’s fire but are most vulnerable to enemy Titan attacks and enemy defensive turrets. When escorting your Titan it’s important to do as much damage as you can to any attacking enemy Titan, defeat any enemy players trying to do the same to your Titan, and destroy any defensive or deployable turrets that are targeting your Titan. The more health your Titan has upon defeating the enemy Titan the more damage it will be able to do to defensive walls before finally being defeated itself!

Some weapons and armor increase your effectiveness at dealing damage to Titans. To achieve this extra damage against titans, these weapons typically sacrifice some portion of their damage against players or other important stats. Balancing the need for faster Titan destruction with the need for effective Titan defense (via killing players) is crucial in any well-rounded team composition. Leveled-up weapons are significantly more effective against Titans and the level 5 Inferno Katana and Bullet Hell are particularly well suited to dishing out massive Titan damage!

What’s a competitive, 5v5 team game without a quality ranked ladder to see where you stand? Ranked mode is intended for the most competitive and focused members of the Minimum community.

Ranked matchmaking takes your own skill as well as your teammates’ into account when matching Titan Mode games in order to create the most even and challenging match possible. To enhance opportunities for teamwork and strategy, ranked mode includes a pre-match lobby where players can discuss their weapon load-outs, armor build paths and desired team roles to create the most effective way to take down your opponents.

Looking for a way to experience all the craziness of fully leveled weapons and armor without the higher level strategy and objective focus of Titan Mode? If so, Team Deathmatch is for you!

Deathmatch Mode is intended as a quicker and less stressful way to play Minimum and take a break from the teamwork-focused nature of Titan Mode. Kills (and thus level 5 weapons) come quicker and are more plentiful and there are no discrete stages to divert you from brawling it out with your opponents. Deathmatch maps also include unique powerups and devices suited to the more frantic nature of the mode.